Buy this item and earn 19 ClubPoints.

Do you have several mobile devices and not enough places to plug in all the chargers? Do you travel and hate carrying chargers for each device? With GearPower QuadSmart USB 4.2A wall charger featuring SmartPower technology, you can connect up to four devices to charge at the same time, including iPhone® and iPad®.

The four built-in USB outputs are controlled by a microprocessor that smartly balances the total 4.2A output between the devices to maximize charging rate. With SmartPower built into the GearPower QuadSmart, you can plug into any of the USB outputs without worrying if it is the right port for your device. GearPower QuadSmart USB 4.2A wall charger plugs into any standard outlet and features folding prongs for easy storage when travelling. Just connect your USB charging cables and simultaneously rapid-charge up to four devices.

Charging Multiple Devices at Once
Connect two iPads into any two QuadSmart ports and each will fast charge at up to 2.4A, or connect four iPhones or other smartphones and each will charge at their normal 1A rate. When you mix devices like charging one iPad and 2 smartphones, QuadSmart power balancing feature divides the available power according to device demand, so in this case the iPad receives up to 2.4A and the remaining power is divided into each smartphone. When the request for power exceeds 4.2A, as when connecting three or four iPads, SmartPower equally divides the charging current to all devices. So, even 4 iPads can simultaneously charge at the lower 1A rate.

GearPower QuadSmart quickly charges even the most power demanding mobile devices, including the Apple iPad®! In fact, iPad Mini® users will see an upgrade to their charging speed over the originally included charger and even charge a second device at the same time! 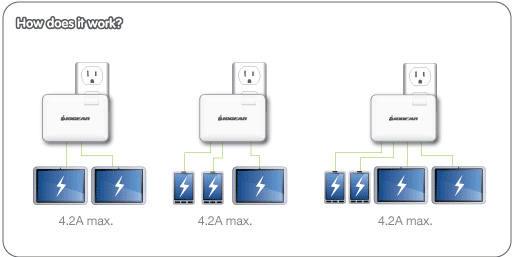 Big Power, Small Package
Compact and folding plug design is pocket sized and easily carried to work, school or when travelling, but still delivers a full 4.2A output. While the GPAW4U4 will charge most USB devices, there are some products with proprietary charging configurations (such as certain BlackBerry and Samsung models, etc.) which are not compatible with aftermarket chargers.

Features and Benefits
• Four USB outputs allow simultaneous charging of tablets, smartphones, etc.
• SmartPower balancing technology divides 4.2A total output among devices as needed, with up to 2.4A on any one port
• Quick-charge up to two iPads or charge four devices simultaneously
• Compact, folding plugs design 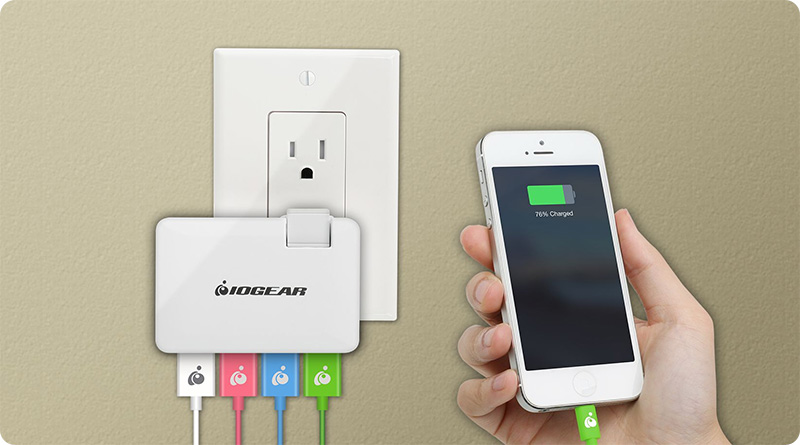